There are no recurrent components used at all in this tutorial. Instead it makes use of convolutional layers, typically used for image processing.

In short, a convolutional layer uses filters. These filters have a width (and also a height in images, but usually not text). If a filter has a width of 3, then it can see 3 consecutive tokens. Each convolutional layer has many of these filters (1024 in this tutorial). Each filter will slide across the sequence, from beginning to the end, looking at all 3 consecutive tokens at a time. The idea is that each of these 1024 filters will learn to extract a different feature from the text. The result of this feature extraction will then be used by the model - potentially as input to another convolutional layer. This can then all be used to extract features from the source sentence to translate it into the target language.

First, import all the required modules and set the random seeds for reproducability.

Next, set up the Fields which decide how the data will be processed. By default RNN models in PyTorch require the sequence to be a tensor of shape [sequence length, batch size] so TorchText will, by default, return batches of tensors in the same shape. However, this tutorial use CNNs which expect the batch dimension to be first. Therefore, tell TorchText to have batches be [batch size, sequence length] by setting batch_first = True.

Also append the start and end of sequence tokens as well as lowercasing all text.

The final bit of data preparation is defining the device and then building the iterator.

The two context vectors per token are a conved vector and a combined vector.

Both of these are returned by the encoder to be used by the decoder.

The image below shows the result of an input sentence - zwei menschen fechten. - being passed through the encoder.

The next step is to pass this hidden vector into $N$ convolutional blocks where the “magic” happens in this model. After passing through the convolutional blocks, the vector is then fed through another linear layer to transform it back from the hidden dimension size into the embedding dimension size. This is the conved vector - each token in the input sequence has one of this. 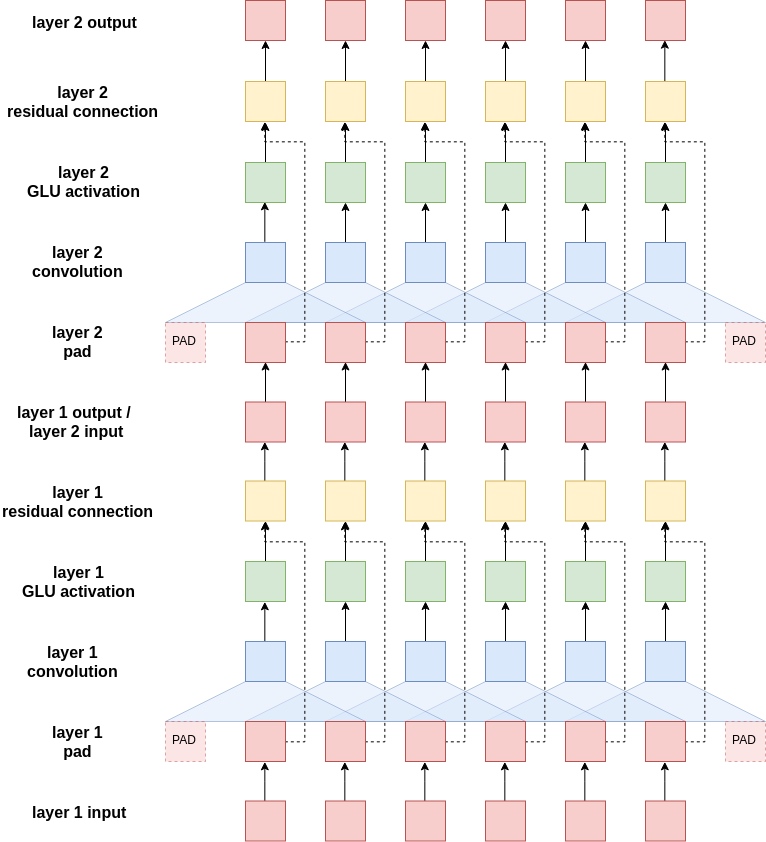 This concludes a single convolutional block. Subsequent blocks take the output of the previous block and perform the same steps. Each block has their own parameters, they are not shared between blocks. The output of the last block goes back to the main encoder - where it is fed through a linear layer to get the conved output and then elementwise summed with the embedding of the token to get the combined output.

To keep the implementation simple, only allow for odd sized kernels. This allows padding to be added equally to both sides of the source sequence.

The scale variable is used by the authors to “ensure that the variance throughout the network does not change dramatically”. The performance of the model seems to vary wildly using different seeds if this is not used.

The positional embedding is initialized to have a “vocabulary” of 100. This means it can handle sequences up to 100 elements long, indexed from 0 to 99. This can be increased if used on a dataset with longer sequences.

The decoder takes in the actual target sentence and tries to predict it. This model differs from the recurrent neural network models previously detailed in these tutorials as it predicts all tokens within the target sentence in parallel. There is no sequential processing, i.e. no decoding loop. This will be detailed further later on in the tutorials.

The decoder is similar to the encoder, with a few changes to both the main model and the convolutional blocks inside the model. 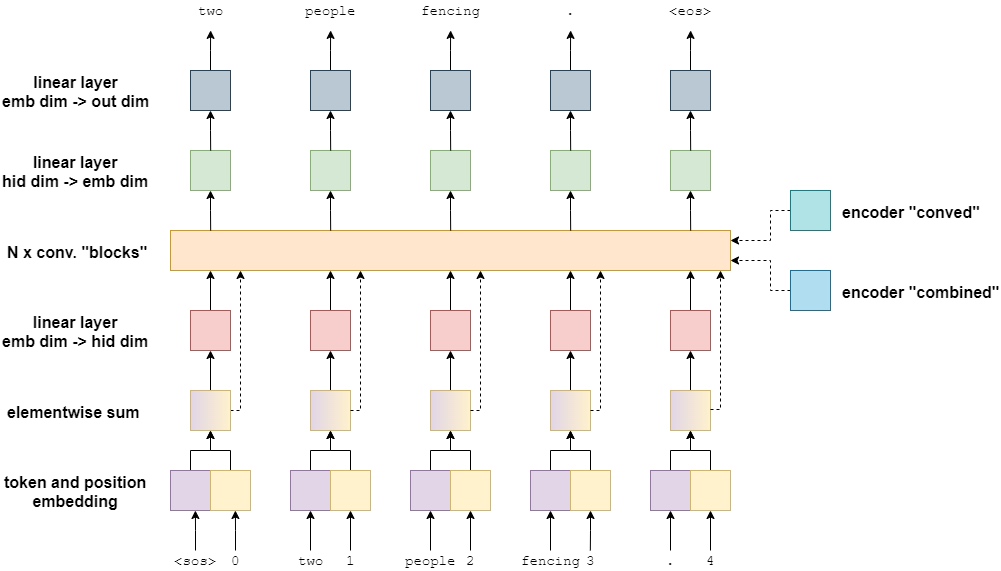 Second, to feed the decoder information from the encoder, the encoder conved and combined outputs are used - again, within the convolutional blocks.

Finally, the output of the decoder is a linear layer from embedding dimension to output dimension. This is used make a prediction about what the next word in the translation should be.

Again, these are similar to the convolutional blocks within the encoder, with a few changes. 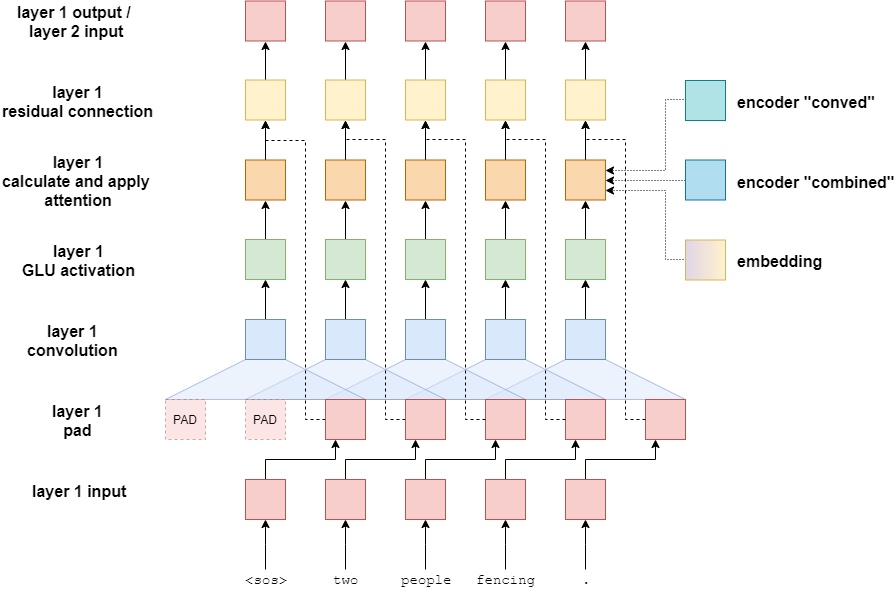 First, the padding. Instead of padding equally on each side to ensure the length of the sentence stays the same throughout, only pad at the beginning of the sentence. As it is processing all of the targets simultaneously in parallel, and not sequentially, need a method of only allowing the filters translating token $i$ to only look at tokens before word $i$. If they were allowed to look at token $i+1$ (the token they should be outputting), the model will simply learn to output the next word in the sequence by directly copying it, without actually learning how to translate.

Let’s see what happens if incorrectly padded equally on each side, like operation in the encoder.

The filter at the first position, which is trying use the first word in the sequence,

Second, after the GLU activation and before the residual connection, the block calculates and applies attention - using the encoded representations and the embedding of the current word. Note: only show the connections to the rightmost token, but they are actually connected to all tokens - this was done for clarity. Each token input uses their own, and only their own, embedding for their own attention calculation.

The attention is calculated by first using a linear layer to change the hidden dimension to the same size as the embedding dimension. Then the embedding summed via a residual connection. This combination then has the standard attention calculation applied by finding how much it “matches” with the encoded conved and then this is applied by getting a weighted sum over the encoded combined. This is then projected back up to the hidden dimenson size and a residual connection to the initial input to the attention layer is applied.

As only pad on one side the decoder is allowed to use both odd and even sized padding. Again, the scale is used to reduce variance throughout the model and the position embedding is initialized to have a “vocabulary” of 100.

This model takes in the encoder representations in its forward method and both are passed to the calculate_attention method which calculates and applies attention. It also returns the actual attention values, but not currently use them.

The encapsulating Seq2Seq module is a lot different from recurrent neural network methods used in previous notebooks, especially in the decoding.

As the decoding is done in parallel do not need a decoding loop. All of the target sequence is input into the decoder at once and the padding is used to ensure each convolutional filter in the decoder can only see the current and previous tokens in the sequence as it slides across the sentence.

This also, however, means cannot do teacher forcing using this model. Do not have a loop in which can choose whether to input the predicted token or the actual token in the sequence as everything is predicted in parallel.

In the paper they find that it is more beneficial to use a small filter (kernel size of 3) and a high number of layers (5+).

Can also see that the model has almost twice as many parameters as the attention based model (20m to 37m).

Next, define the optimizer and the loss function (criterion). As before ignore the loss where the target sequence is a padding token.

Then, define the training loop for the model.

Handle the sequences a little differently than previous tutorials. For all models never put the

The evaluation loop is the same as the training loop, just without the gradient calculations and parameter updates.

Again, have a function that tells us how long each epoch takes.

Finally, train model. Notice have reduced the CLIP value from 1 to 0.1 in order to train this model more reliably. With higher CLIP values, the gradient occasionally explodes.

Although have almost twice as many parameters as the attention based RNN model, it actually takes around half the time as the standard version and about the same time as the packed padded sequences version. This is due to all calculations being done in parallel using the convolutional filters instead of sequentially using RNNs.

Then load the parameters which obtained the lowest validation loss and calculate the loss over the test set.

Now can do translations from model with the translate_sentence function below.

The steps taken are:

Next, have a function what will display how much the model pays attention to each input token during each step of the decoding.

Then finally start translating some sentences. Note: these sentences have been cherry picked.

First, get an example from the training set:

Then pass it into translate_sentence function which gives us the predicted translation tokens as well as the attention.

Can see that it doesn’t give the exact same translation, however it does capture the same meaning as the original. It is actual a more literal translation as aus holz literally translates to of wood, so a wooden playhouse is the same thing as a playhouse made of wood.

Can view the attention of the model, making sure it gives sensibile looking results.

Can see it correctly pays attention to aus when translation both made and of. 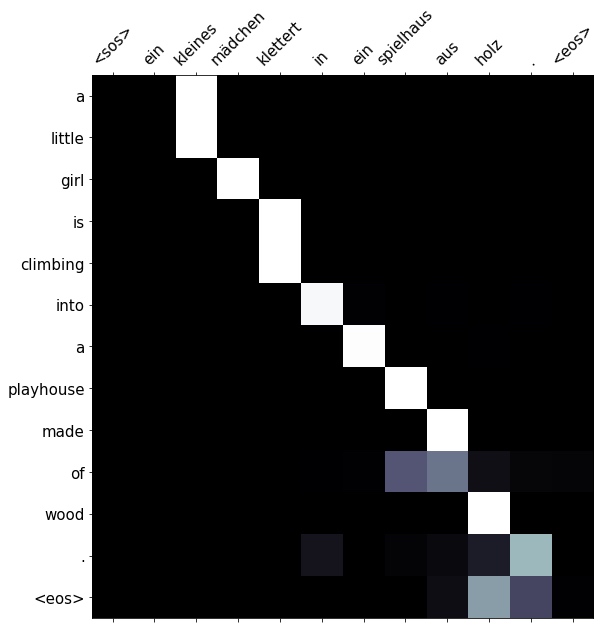 Let’s see how well it translates an example that is not in the training set.

The model manages to do a decent job at this one, except for changing wearing to in. 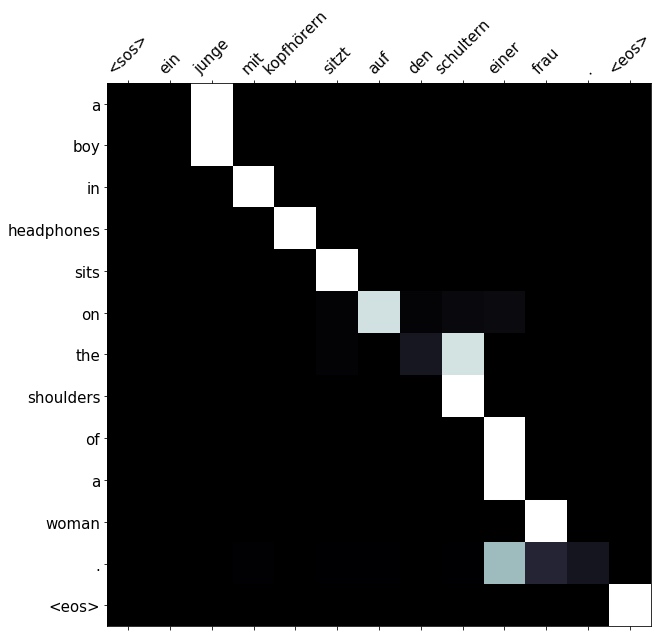 Finally, let’s get an example from the test set.

Get a generally correct translation here, although the model changed sitting in a chair to sitting on a chair and removes the and.

The word magazines is not in vocabulary, hence it was output as an unknown token. 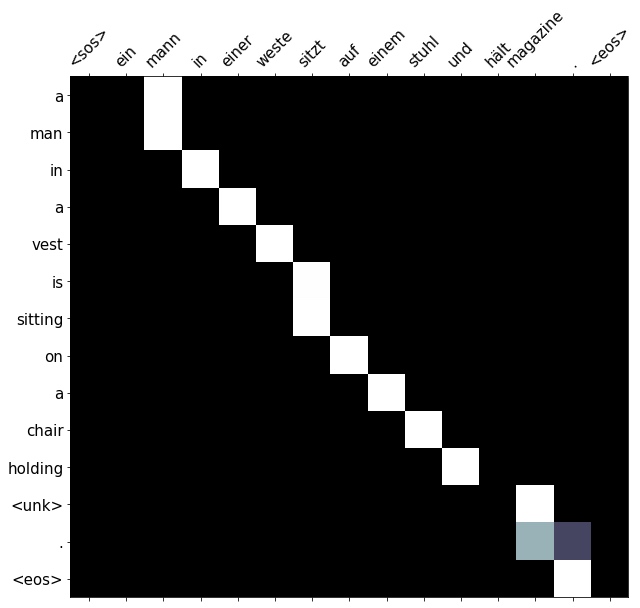 Finally, calculate the BLEU score for the model.

Get a BLEU score of ~33, compared to the attention based RNN model which gave us a ~28. This is a ~17% improvement in BLEU score.