Design a data structure that supports the following two operations:

Serialization is the process of converting a data structure or object into a sequence of bits so that it can be stored in a file or memory buffer, or transmitted across a network connection link to be reconstructed later in the same or another computer environment.

Clarification: The above format is the same as how LeetCode serializes a binary tree. You do not necessarily need to follow this format, so please be creative and come up with different approaches yourself.

Note: Do not use class member/global/static variables to store states. Your serialize and deserialize algorithms should be stateless.

Given a 2D matrix matrix, find the sum of the elements inside the rectangle defined by its upper left corner (row1, col1) and lower right corner (row2, col2). 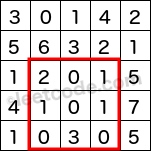 315. Count of Smaller Numbers After Self

You are given an integer array nums and you have to return a new counts array. The counts array has the property where counts[i] is the number of smaller elements to the right of nums[i].

329. Longest Increasing Path in a Matrix

Given an integer matrix, find the length of the longest increasing path.

From each cell, you can either move to four directions: left, right, up or down. You may NOT move diagonally or move outside of the boundary (i.e. wrap-around is not allowed).

340 Longest Substring with At Most K Distinct Characters

Given a string S, find the length of the longest substring T that contains at most k distinct characters.